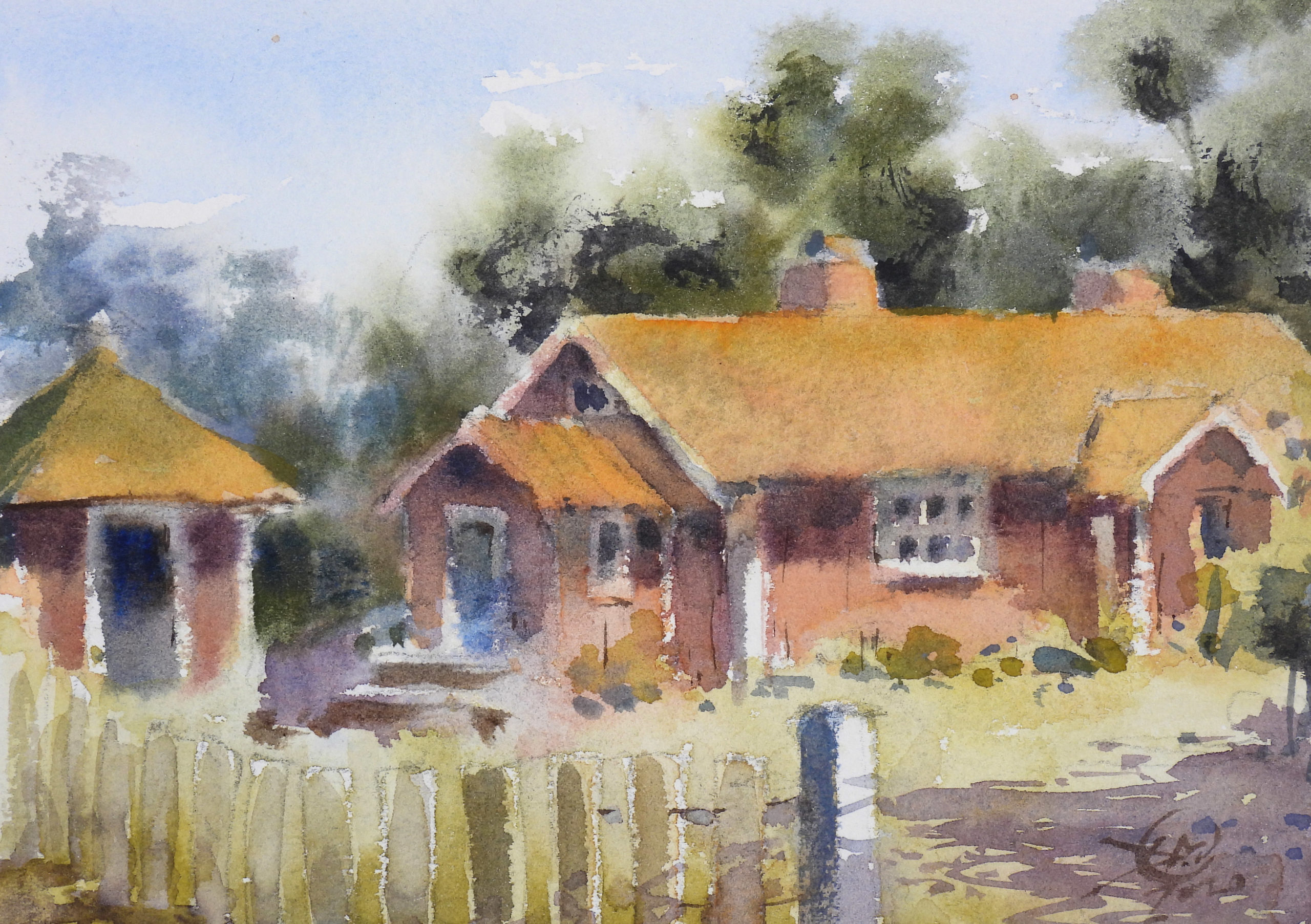 I really enjoyed myself painting this little sketch in the early summer light of Sweden. If you would like to see me painting it please click here. https://youtu.be/vWcI0TE8NHw

A few weeks ago I went on a short trip to Gålö which is 27 km south of Stockholm. It’s a nature reserve, and camping there is relatively easy. It always amazes me how close I actually am to nature even though I spend most of my time in an urban environment like Stockholm.
I wandered around the reserve for ages exploring and enjoying the sights and sounds of early summer. Eventually I found a scene that I wanted to sketch, I had my camera gear with me and so it has become my 18th YouTube episode. I hope you enjoy it. I explain my process as I go along, painting techniques and compositional thoughts etc. You can see a list of the watercolours I use in the description under the YouTube video.

If you would like to support the making of Meldrum Art videos please visit my Patreon page, there you can follow my weekly vlog, see bonus material, and even receive original watercolours. www.patreon.com/meldrumart

Life for all of us is dominated by the Corona virus at the moment. My time in India was cut short by one week because of it. We were actually extremely close to being stuck in New Delhi for weeks or even months as countries closed their borders one by one at an alarming speed.

I’ve been home for two weeks now and it feels like India was a long time ago, isn’t it strange how we move on so quickly to the next period in our lives and forget what we were doing just a few weeks ago. I keep a journal so I have that at least to remind me of what was going on at a given date, actually that isn’t totally true as I don’t write entries everyday. Yeap, I wish I was more disciplined but I am just a human being with flaws galore.

I was invited Rajasthan to paint plein air for 22 days, ten days in Udaipur and 12 days in Jaipur. I was invited by Shryansy International in Collaboration with Saint Petersburg Centre For Humanitarian Programs. The group of painters were exclusively Russian speaking which made it kinda interesting for me to have a conversation. To be honest it was difficult sometimes, luckily I am very used to working alone so when I was excluded due to language and cultural barriers I didn’t mind too much. I got on really well with the Russian artists, we communicated with broken English, sign-language and Google Translate. After a number of weeks we had been through a lot together, each day we seemed to be plunged into chaos and we had to make the best of it we could. I think because of this we bonded very well.
I hope I can visit Russia next year and spend time with my new friends from the east.

I arrived in New Delhi on the 25th of February. I really didn’t know what to expect. I had booked a hotel close to the train station and so my taxi took me there, … eventually that is. I had my first experience of the chaos in India, cars seemed to drive freely on both sides of the broad roads. They were driving slowly which was strangely reassuring. The taxi driver just couldn’t find my hotel, Google Maps didn’t really help either. After many questions to the locals the driver finally found the place.

From the balcony of the hotel I could see kids play dare with packs of street dogs, I took a brief walk later and ended up a Muslim slum. I don’t care who inhabits the slum but I just wasn’t used to the dirt, the pollution, the crowded alleys and the stares, I got looks of, what the f*ck are you doing here? A good question really. I retreated to the hotel after getting a precious local sim card with 48 gigs limit of surfing.

Before taking the train next day to Udaipur I had time to do a bit of sight-seeing. The Humayun’s Tomb was close by so I elected to visit there. I managed to do a few sketches, I was happy with that as I had been struggling to paint because of long drawn out winter that affected me enormously in a negative way.

Later I took the sleeper-train to Udaipur. It was one of those old trains you would have seen if you have watched the Ghandi movie. It was pretty worn out and charming, it was crowded which is standard fair in India. Under my bunk was a old blond hippy woman, an original in fact, she had first arrived in India from Australia in 1969. I sat with her and she explained the changes that have occurred in India since the 60’s. She was a volunteer at an animal clinic in Udaipur and told me sad stories about cows dying because they had so many plastic bags in their stomachs. I would later see street cows eating from the rubbish on the street, people would throw out food in plastic bags and left it for the cows, dogs, monkeys and rats to shift through it. That made me really sad.

I am going to crunch the rest of trip to Udaipur into a few more lines as I have other things to do.
… I basically met the Russian artists and the organisers at a nice villa outside of Udaipur, it was called Kings Villa. Later we would realise that the villa was very far away from the centre of town where we would be painting. I don’t want to be negative here so I am just going to say the organisers did their best during my visit to India and I will leave it at that.
Experiencing Udaipur was a blast to the senses, the old town and it’s narrow streets were jam-packed with people, cows, dogs, tuk tuks and mopeds. I quickly learned that the best thing to do was to go to the water’s edge, it was calmer there. I still had ten youths asking me questions like, “Are you an artist?”. I would politely answer their questions as they were all very polite, very curious and chatty. I couldn’t tell them to get lost, they were too nice. The only negative was that it was so difficult to focus on painting the scene in front of me. I had originally intended to film myself and make little YouTube films but that ambition quickly disappeared as I battled to produce a decent watercolour.

Below there are 5 watercolours from my time in Udaipur. Each painting is 36 x 26 cm in size. I will write about Jaipur soon and tell you about my experiences during the Holi festival, more chaos and great watercolour moments. Cheers. 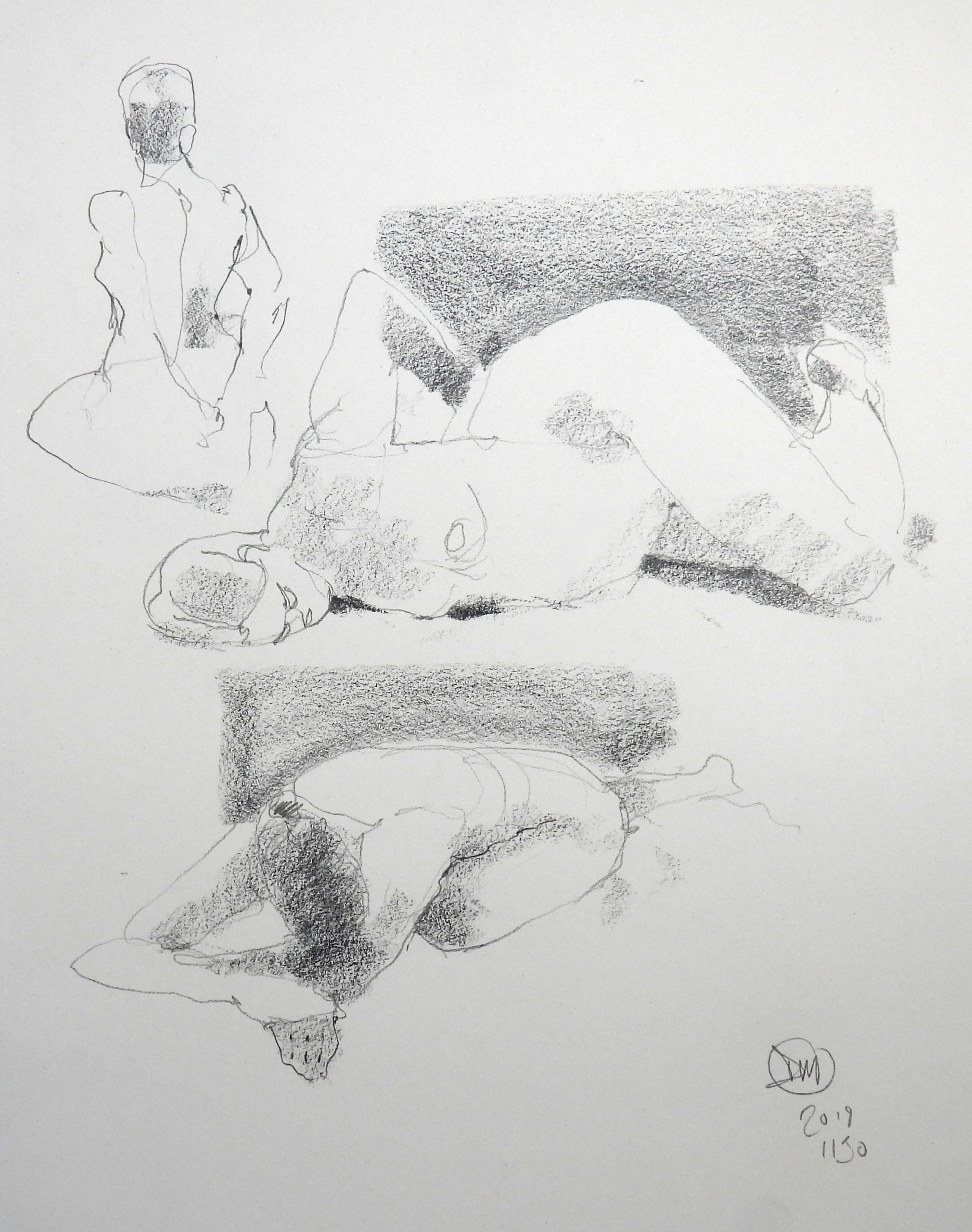 Just a little reminder to say Meldrum Kroki, my life drawing class at Dieselverkstaden is cancelled until further notice. Please check the Dieselverkstaden calendar for future classes when the world returns to some sort of normality. Thanks. Sketch safely, love.
Calender link: https://dieselverkstaden.se/kurser/meldrum-kroki-2020/

These two watercolour sketches are from Humayun’s Tomb in New Delhi. It was fun to get started, it was my first day in India. 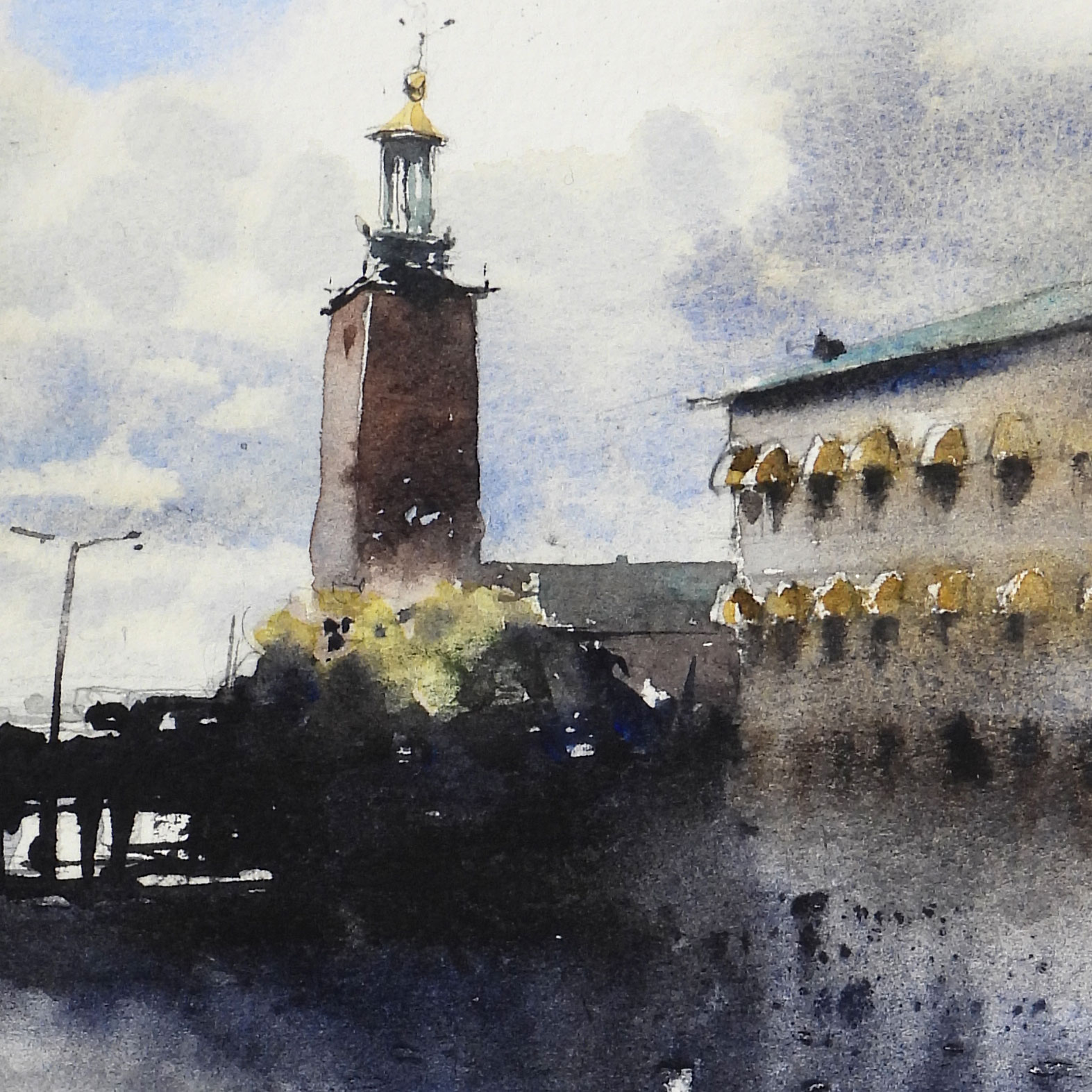 Yeap, I wasn’t totally happy with this watercolour so I was forced to chop it up so that I could enjoy it. I’m a happy butcher now. It’s best to love a whole painting of course but sometimes one has to be brutal.
Click the thumbnail below to see the full sized image. 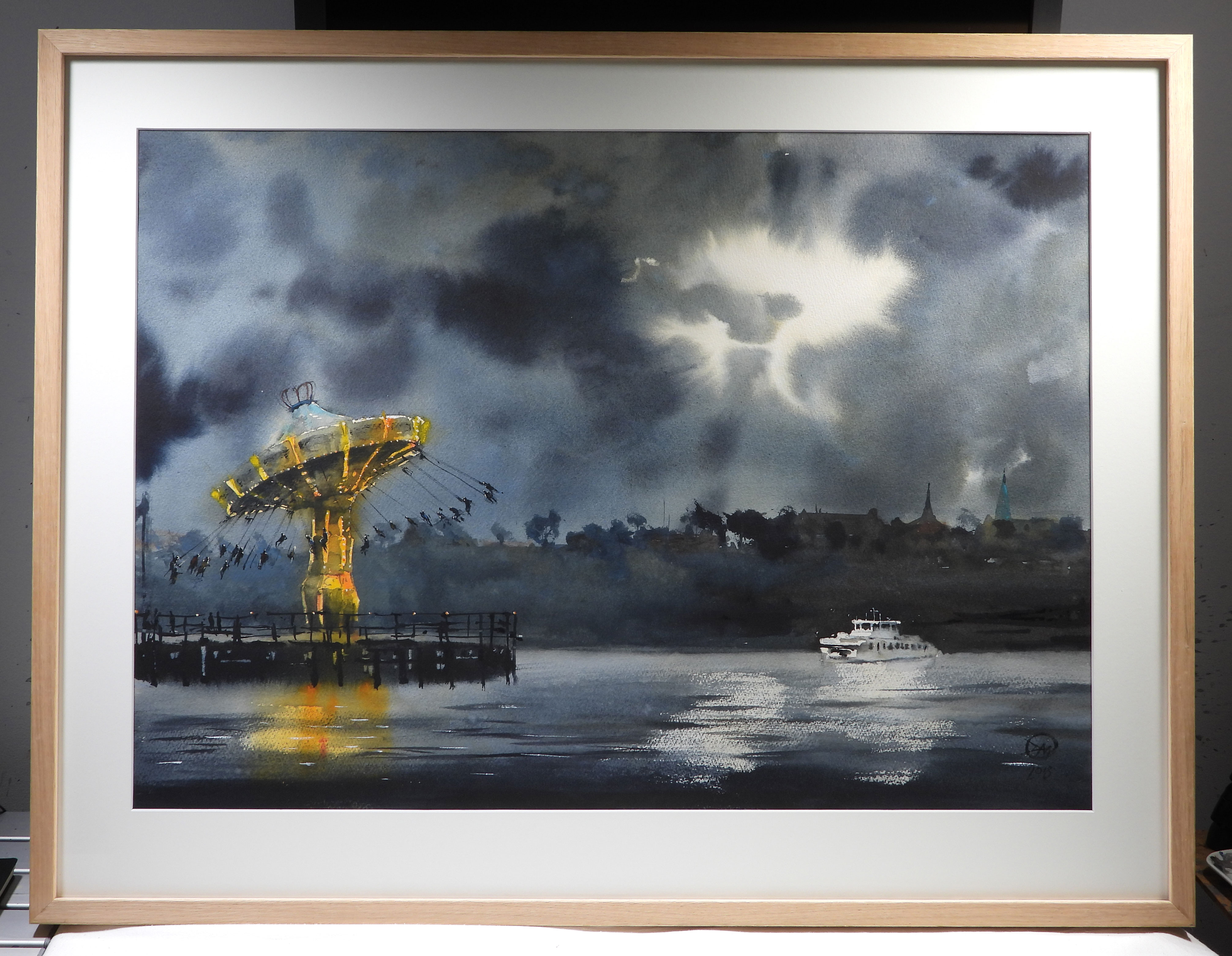 This painting which I painted last year has been chosen for a winter exhibition in Nacka Konsthall, Sickla – not far from the centre of Stockholm. It’s very pleasing of course and I look forward to the opening of the exhibition on the 23rd of November. The painting which was chosen is called, Gröna Lund and is 70 x 50 cm in size.
The painting has travelled a lot, it was in the ECWS exhibition in Haapsalu, Estonia during the summer. It’s always an honour to represent Sweden in these European Watercolour Society exhibitions.

Click the thumbnail below if you want to see a larger image. 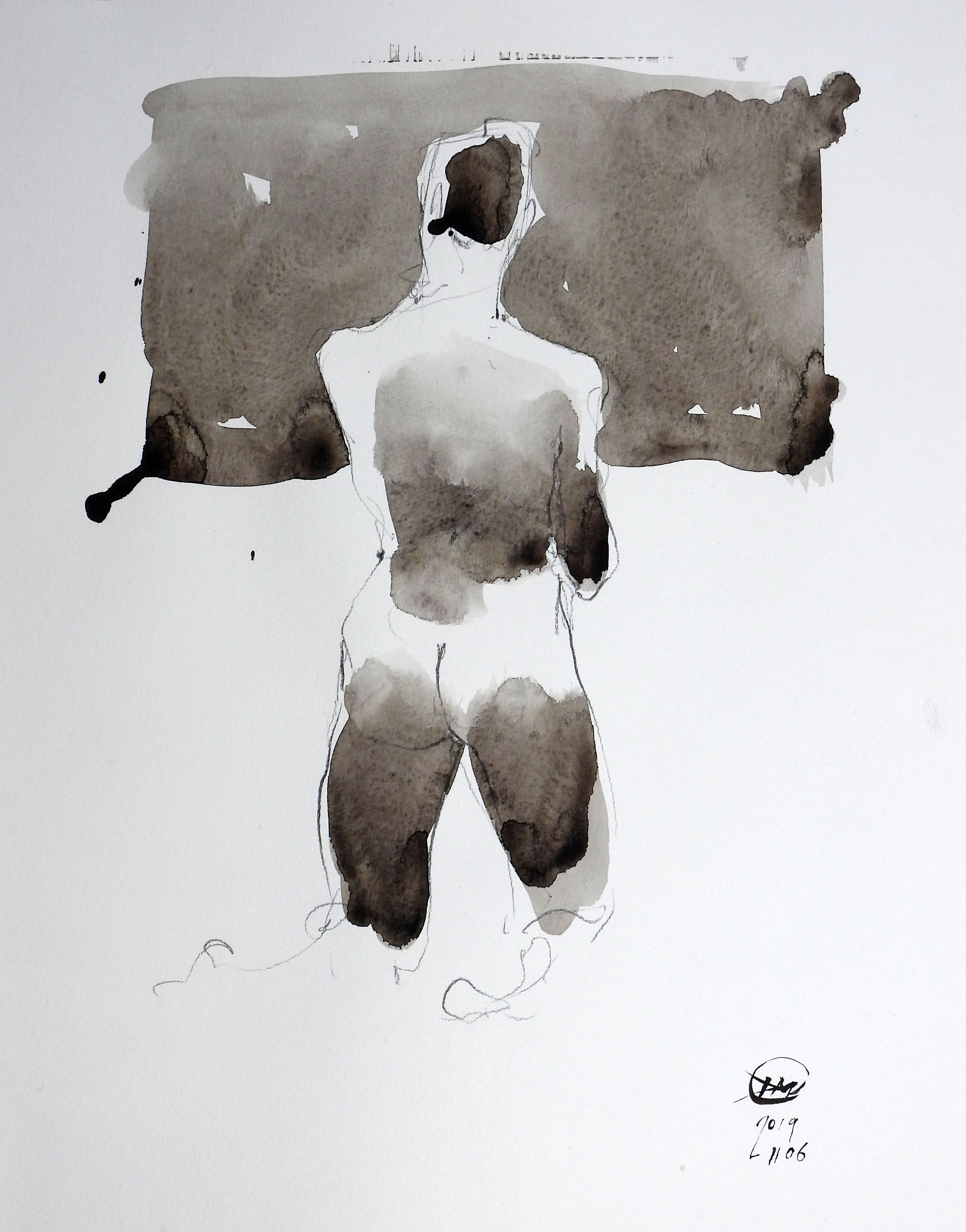 Since I came back to Stockholm after the summer break I have been making sure I go to life drawing classes at least once a week. As I have mentioned before it is so important to sketch regularly, everyday if possible. Life drawing is a wonderful way to practice drawing from real life, I also like to push myself and paint. These sketches are either 2 or 5 minute, not much time to think so everything has to be instinctive, you can only achieve this through hours of practice.

I use a plastic airlines plate with a watercolour cup stuck in the middle of it with Super Glue, I have Sepia tube colour in the cup. Choosing which watercolour to use is made easy this way, I have only the one choice. 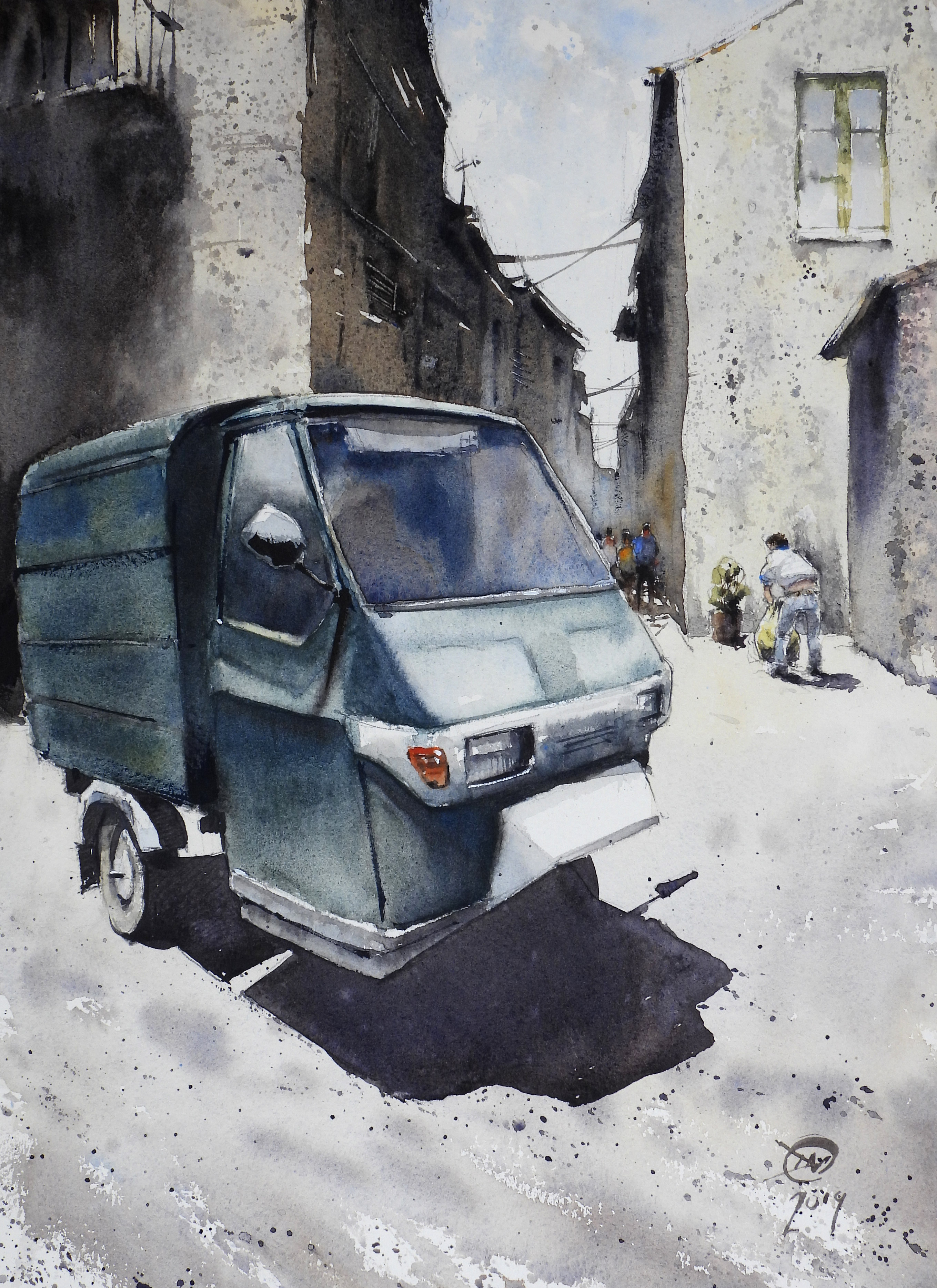 Yes, I had a wonderful holiday in Sicily this summer. It seems so long ago now, especially now that the autumn leaves have fallen and the bare trees are almost black in tone.
I paint every morning and so I often browse through my photo reference folder which is full of potential watercolour scenes. And so it was with this scene, it just said hello to me and I started painting it. I never know what I am going to paint before I start, it’s interesting how we get inspired, it can be different everyday.
I am happy with this watercolour, I seem to have found a new awareness on how to tackle a scene, it excites me and I want to just paint more scenes, isn’t life great! 🙂

Hi my name is David Meldrum and I love to paint watercolours. I live in Stockholm, Sweden and I am originally from Ireland.
If you would like to support my art and demonstration videos, please visit my Patreon account.
(Thank you! 😀 )
www.patreon.com/meldrumart


Recent Comments
meldrum posts
Archives
%d bloggers like this:
We use cookies to ensure that we give you the best experience on our website. If you continue to use this site we will assume that you are happy with it.Ok