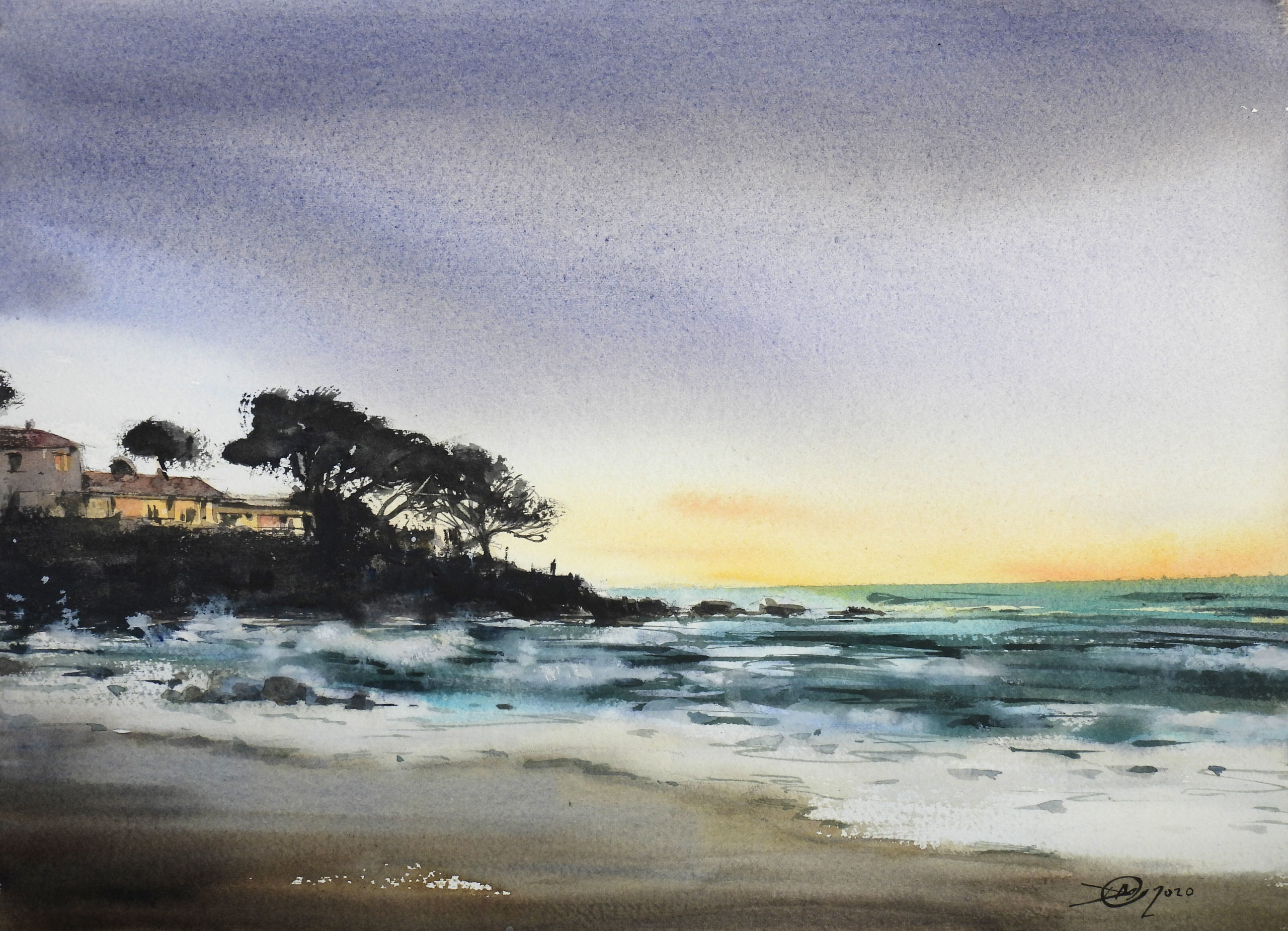 I’ve mentioned this before but I’ll say it again, one of the most important moments in my watercolour development was when I participated in a course in 2016 featuring Chien Chung-Wei. The course, the only one I’ve ever been on was run by the fantastic Angela Barbi of Epc watercolour courses in Girona.

Chien Chung-Wei is my main source of inspiration and learning, there are others that inspire but he is the artist I study most. Like all good artists he is also learning himself and trying to improve with each painting, it’s fascinating for me to see how he creates light and designs his compositions.

To anyone out there who is trying to learn how to paint, find an artist that you love and learn from them, study their work and ask questions like, why is this picture so wonderful?

My own watercolour today is from a photo I took last spring in Calella, Costa Brava. It is a scene that has been painted by many watercolour masters throughout the years. This is my attempt, an evening scene in Calella.

Click the Thumbnail below to see the full-sized image. 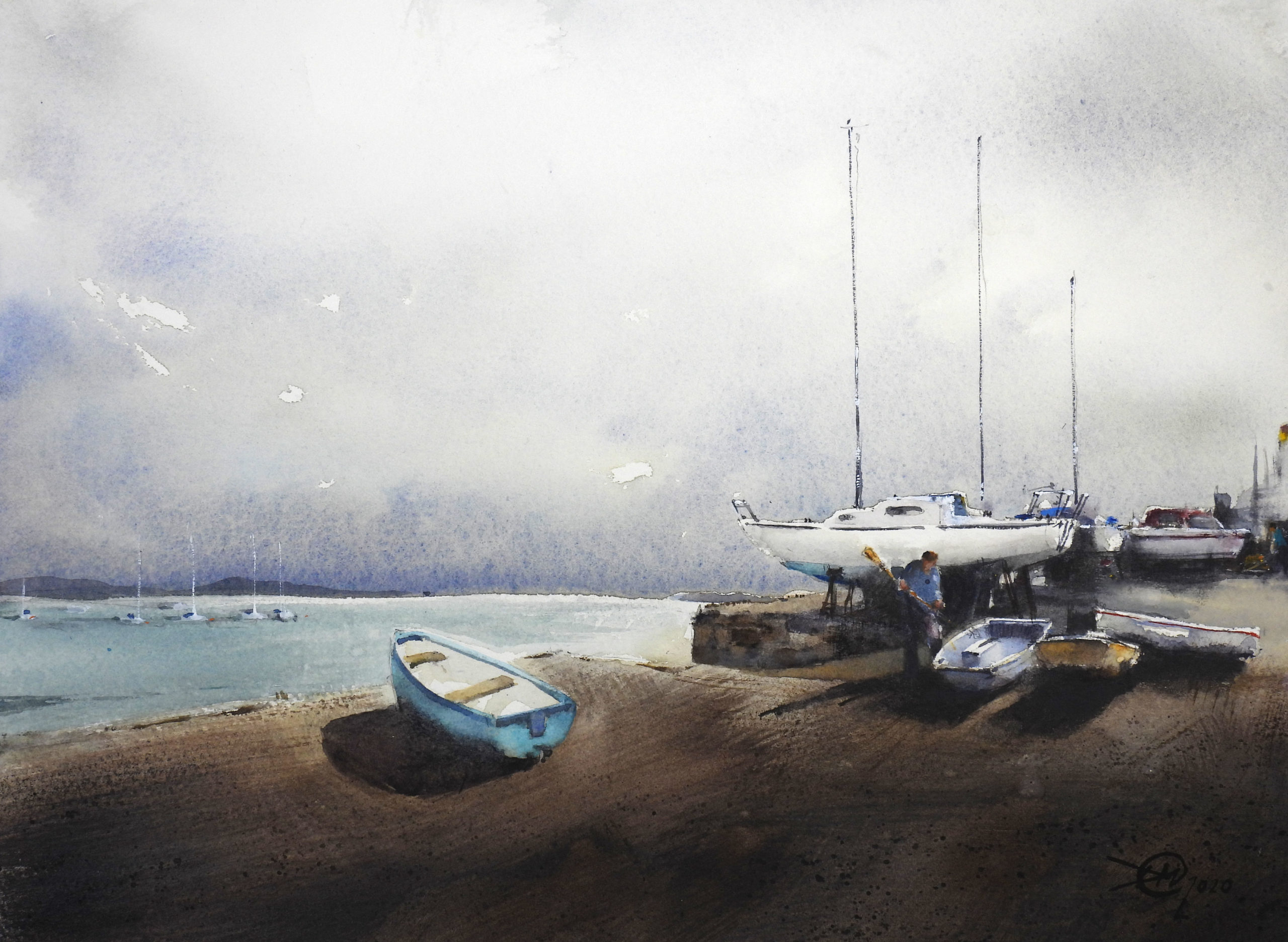 It’s Monday today and like everybody else right now I spend most of my time indoors trying to avoid the Corona virus. This morning was the start of a new week but it was hard to know because I was still in my comfort clothes, you know, sweatpants and an old t-shirt type of thing. So I sat at my desk and luckily I have that wee hand-written sign on the wall in front of me which simply states, “Just Paint!”. It’s so damn useful sometimes to be told what to do.

I am still going through my photos of Ireland for inspiration. I might paint outdoors tomorrow. There is a rumour it might be getting warmer. I would like to visit the archipelago, but still on the mainland. I don’t want to take a ferry at the moment with the pandemic still very real. I wonder when we will be all safe again?
The featured painting is from a photograph I took in Donaghadee, Northern Ireland last year.
Title: Boat season 36 x 26 cm.

Click the thumbnail below for a full sized image. 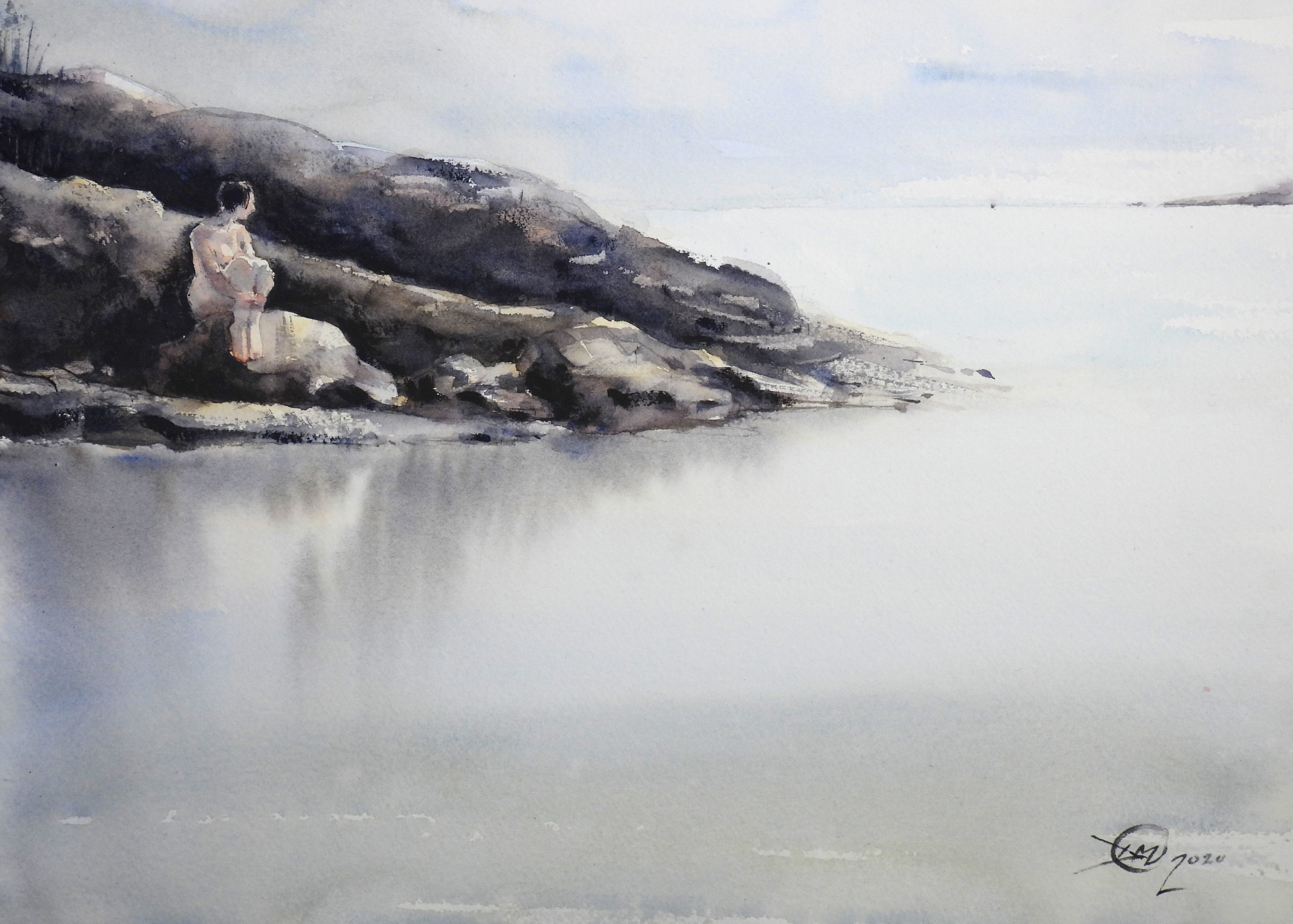 We sailed to Finland and Åland last year. Such wonderful memories exploring the small islands and being blissfully alone for days on end.

This watercolour titled, Summer in Åland is 36 x 26 cm. Click the thumbnail below to see the full-sized image. 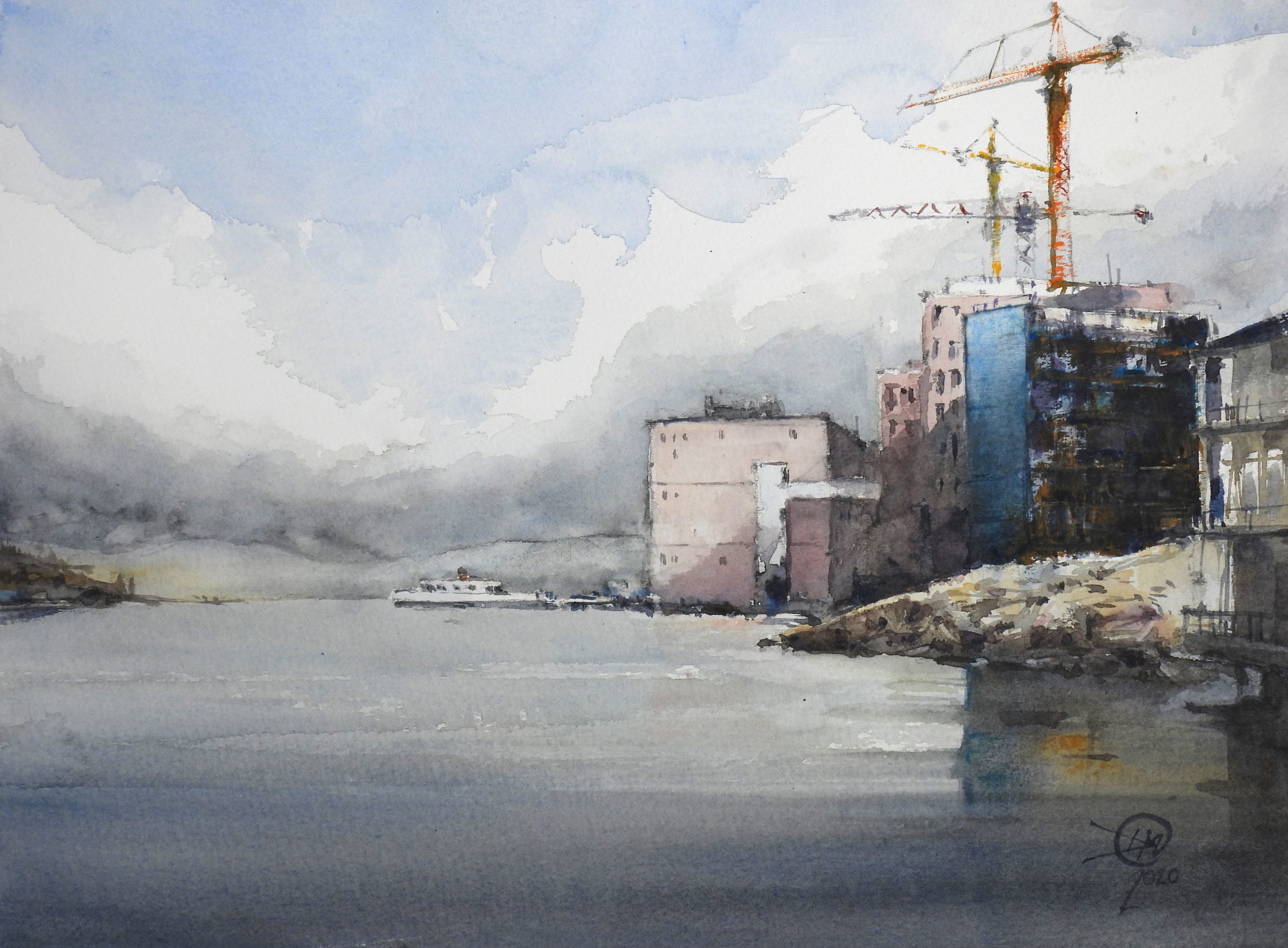 I took myself out during the week to paint plein air. The sun was shining and it might even have been 10 degrees but I’m not sure. I brought extra leggings which I put on quite quickly as it was very cool in the shade of the building next to the water’s edge.
It was interesting how the paper and watercolour pigment behaved in the cool conditions, it was very different from my time in India or even the studio. I found that the pigment was not absorbed by the paper as easily. It wasn’t a big deal, I adjusted quickly and enjoyed my two hours by the water.
Sweden being Sweden most people left me alone which is good considering we are in the middle of a pandemic. A few were curious but they kept two metres away.
I am so looking forward to painting plein air more often now as the temperature is rising and the sun is higher in the sky. The days are much longer too.
I have bought a van that I am going to convert into a studio plus camper. I will publish a post about this exciting project during the coming week. 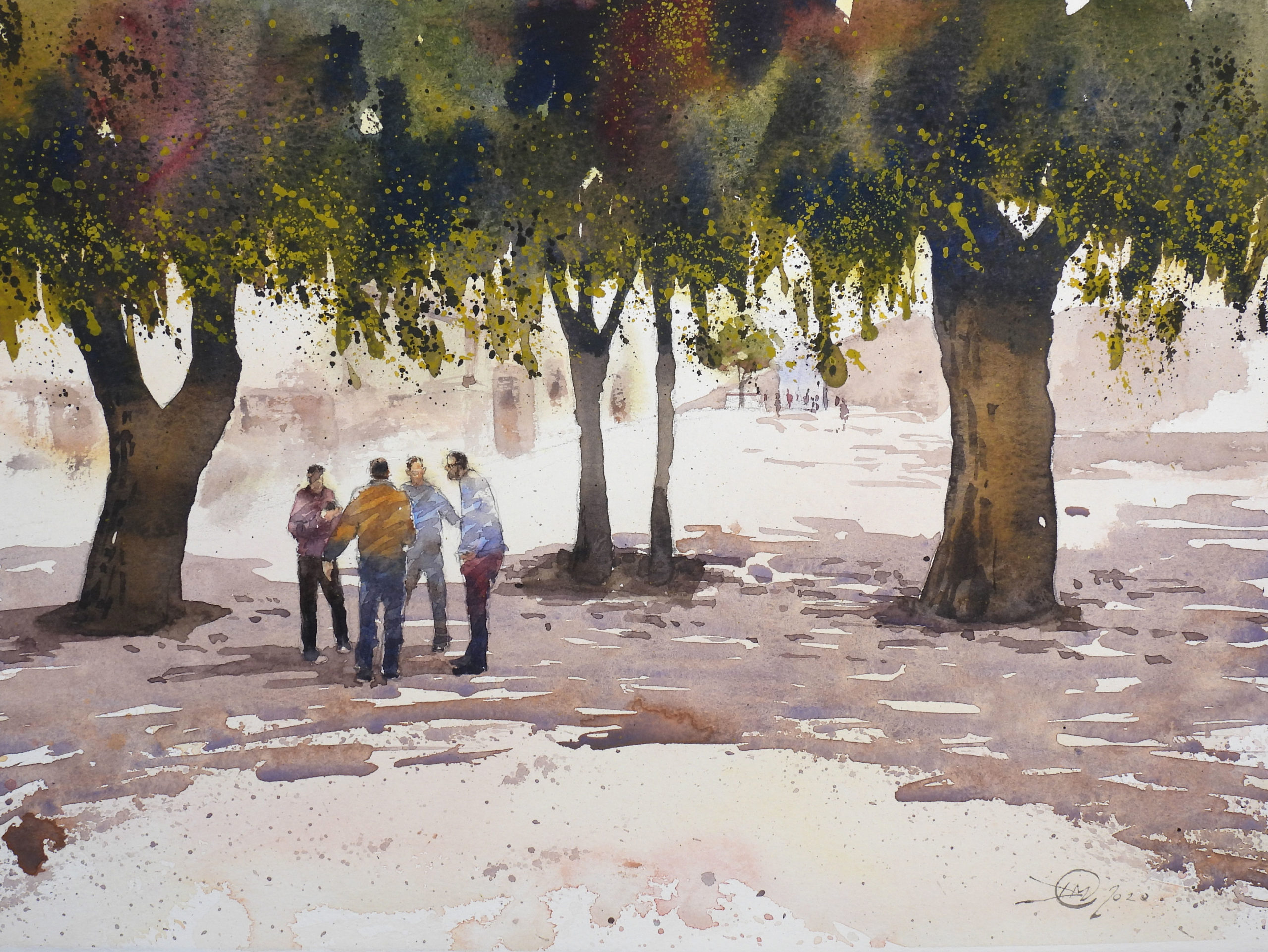 Life for all of us is dominated by the Corona virus at the moment. My time in India was cut short by one week because of it. We were actually extremely close to being stuck in New Delhi for weeks or even months as countries closed their borders one by one at an alarming speed.

I’ve been home for two weeks now and it feels like India was a long time ago, isn’t it strange how we move on so quickly to the next period in our lives and forget what we were doing just a few weeks ago. I keep a journal so I have that at least to remind me of what was going on at a given date, actually that isn’t totally true as I don’t write entries everyday. Yeap, I wish I was more disciplined but I am just a human being with flaws galore.

I was invited Rajasthan to paint plein air for 22 days, ten days in Udaipur and 12 days in Jaipur. I was invited by Shryansy International in Collaboration with Saint Petersburg Centre For Humanitarian Programs. The group of painters were exclusively Russian speaking which made it kinda interesting for me to have a conversation. To be honest it was difficult sometimes, luckily I am very used to working alone so when I was excluded due to language and cultural barriers I didn’t mind too much. I got on really well with the Russian artists, we communicated with broken English, sign-language and Google Translate. After a number of weeks we had been through a lot together, each day we seemed to be plunged into chaos and we had to make the best of it we could. I think because of this we bonded very well.
I hope I can visit Russia next year and spend time with my new friends from the east.

I arrived in New Delhi on the 25th of February. I really didn’t know what to expect. I had booked a hotel close to the train station and so my taxi took me there, … eventually that is. I had my first experience of the chaos in India, cars seemed to drive freely on both sides of the broad roads. They were driving slowly which was strangely reassuring. The taxi driver just couldn’t find my hotel, Google Maps didn’t really help either. After many questions to the locals the driver finally found the place.

From the balcony of the hotel I could see kids play dare with packs of street dogs, I took a brief walk later and ended up a Muslim slum. I don’t care who inhabits the slum but I just wasn’t used to the dirt, the pollution, the crowded alleys and the stares, I got looks of, what the f*ck are you doing here? A good question really. I retreated to the hotel after getting a precious local sim card with 48 gigs limit of surfing.

Before taking the train next day to Udaipur I had time to do a bit of sight-seeing. The Humayun’s Tomb was close by so I elected to visit there. I managed to do a few sketches, I was happy with that as I had been struggling to paint because of long drawn out winter that affected me enormously in a negative way.

Later I took the sleeper-train to Udaipur. It was one of those old trains you would have seen if you have watched the Ghandi movie. It was pretty worn out and charming, it was crowded which is standard fair in India. Under my bunk was a old blond hippy woman, an original in fact, she had first arrived in India from Australia in 1969. I sat with her and she explained the changes that have occurred in India since the 60’s. She was a volunteer at an animal clinic in Udaipur and told me sad stories about cows dying because they had so many plastic bags in their stomachs. I would later see street cows eating from the rubbish on the street, people would throw out food in plastic bags and left it for the cows, dogs, monkeys and rats to shift through it. That made me really sad.

I am going to crunch the rest of trip to Udaipur into a few more lines as I have other things to do.
… I basically met the Russian artists and the organisers at a nice villa outside of Udaipur, it was called Kings Villa. Later we would realise that the villa was very far away from the centre of town where we would be painting. I don’t want to be negative here so I am just going to say the organisers did their best during my visit to India and I will leave it at that.
Experiencing Udaipur was a blast to the senses, the old town and it’s narrow streets were jam-packed with people, cows, dogs, tuk tuks and mopeds. I quickly learned that the best thing to do was to go to the water’s edge, it was calmer there. I still had ten youths asking me questions like, “Are you an artist?”. I would politely answer their questions as they were all very polite, very curious and chatty. I couldn’t tell them to get lost, they were too nice. The only negative was that it was so difficult to focus on painting the scene in front of me. I had originally intended to film myself and make little YouTube films but that ambition quickly disappeared as I battled to produce a decent watercolour.

Below there are 5 watercolours from my time in Udaipur. Each painting is 36 x 26 cm in size. I will write about Jaipur soon and tell you about my experiences during the Holi festival, more chaos and great watercolour moments. Cheers. 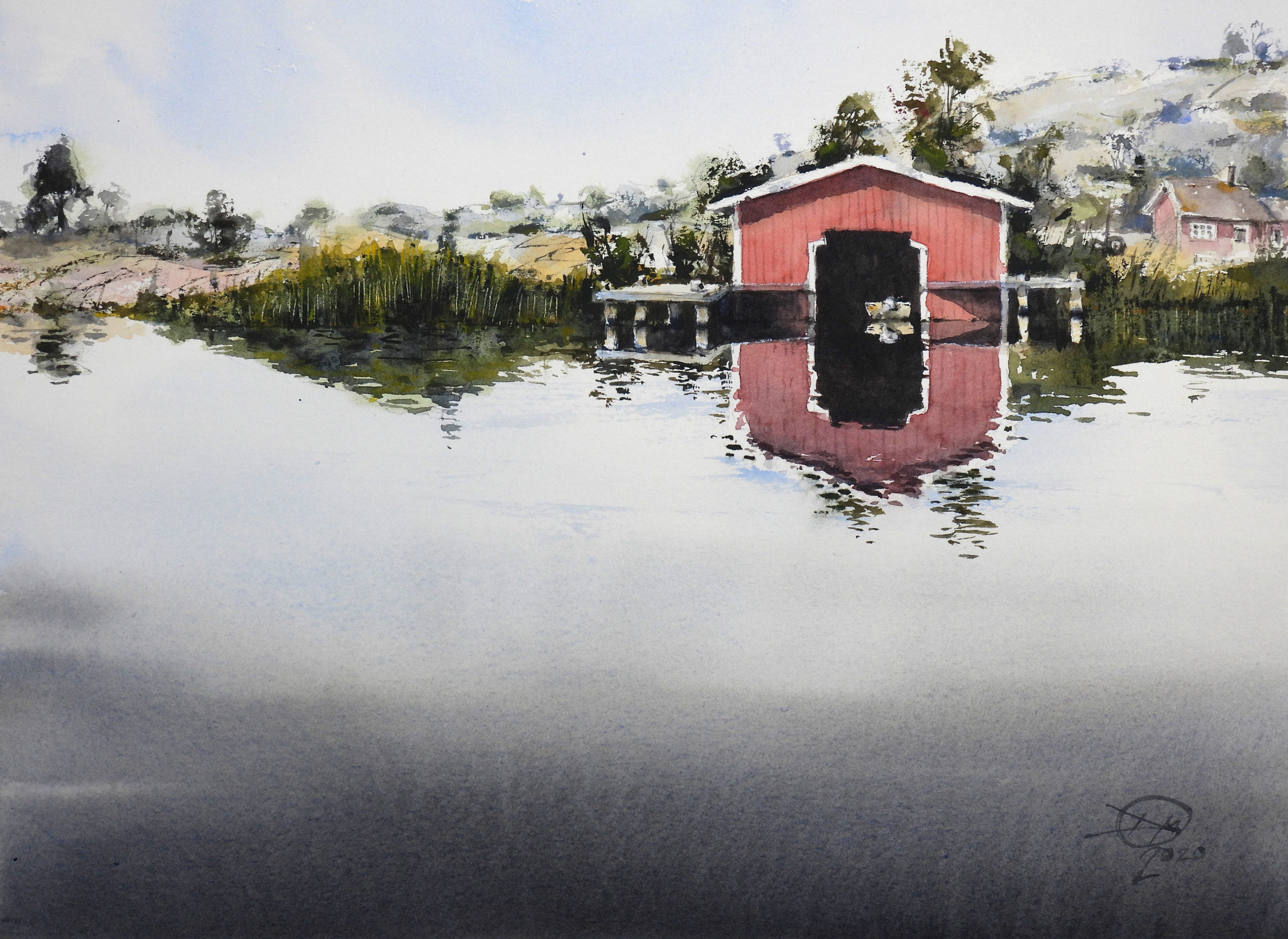 One presumes that the the pandemic will end and we will be allowed to enjoy the summer when it comes. That is my hope at any rate. I haven’t painted plein air since India, waiting for the temperature to rise which it has now so I have no excuse. Out into nature you go David and paint, paint, paint.

This watercolour is from a photograph I took on my phone last summer. We were visiting Rödhamn harbour in Åland. We stayed for a night or two as we slowly explored the archipelago there.

Rödhamn, Åland 36 x 26 cm
Click the thumbnail below to see the full-sized image.

My name is David Meldrum, I love painting watercolours. Another passion I have is life drawing, I run a class called Meldrum Kroki. I was born in Ireland but since 1990 I have lived in Stockholm, Sweden.
You can join the Meldrum Art supporters club, visit my Patreon page by clicking the link below.
(Thank you! 😀 )
www.patreon.com/meldrumart


Archives
%d bloggers like this:
We use cookies to ensure that we give you the best experience on our website. If you continue to use this site we will assume that you are happy with it.Ok