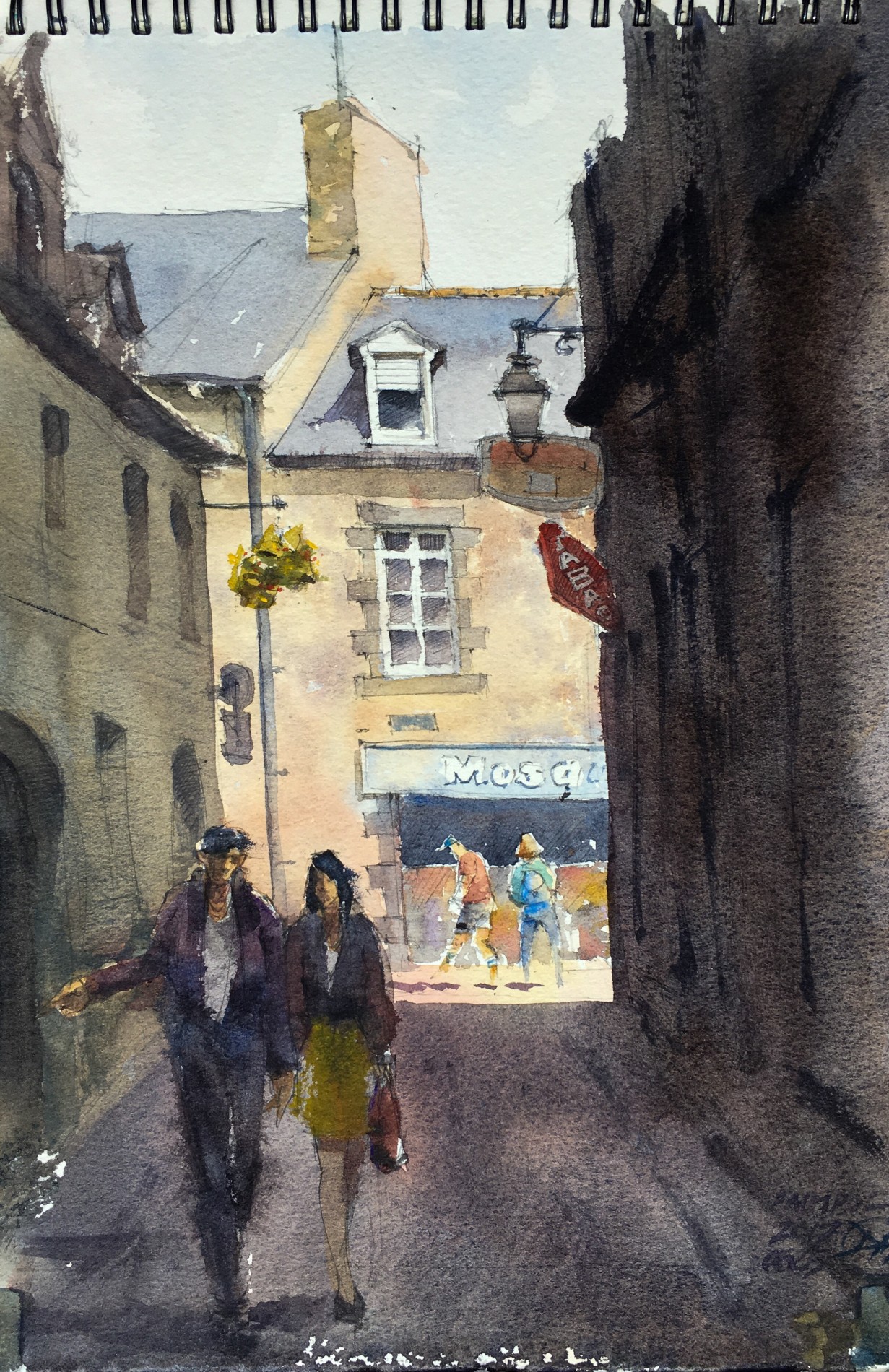 I think capturing the light is the hardest skill to achieve in painting. I have been studying composition and tonal values during the last year, it is through the careful balance of tones that one achieves light. It’s really hard to master but I’m having fun trying. This watercolour was painted plein air a few days ago. 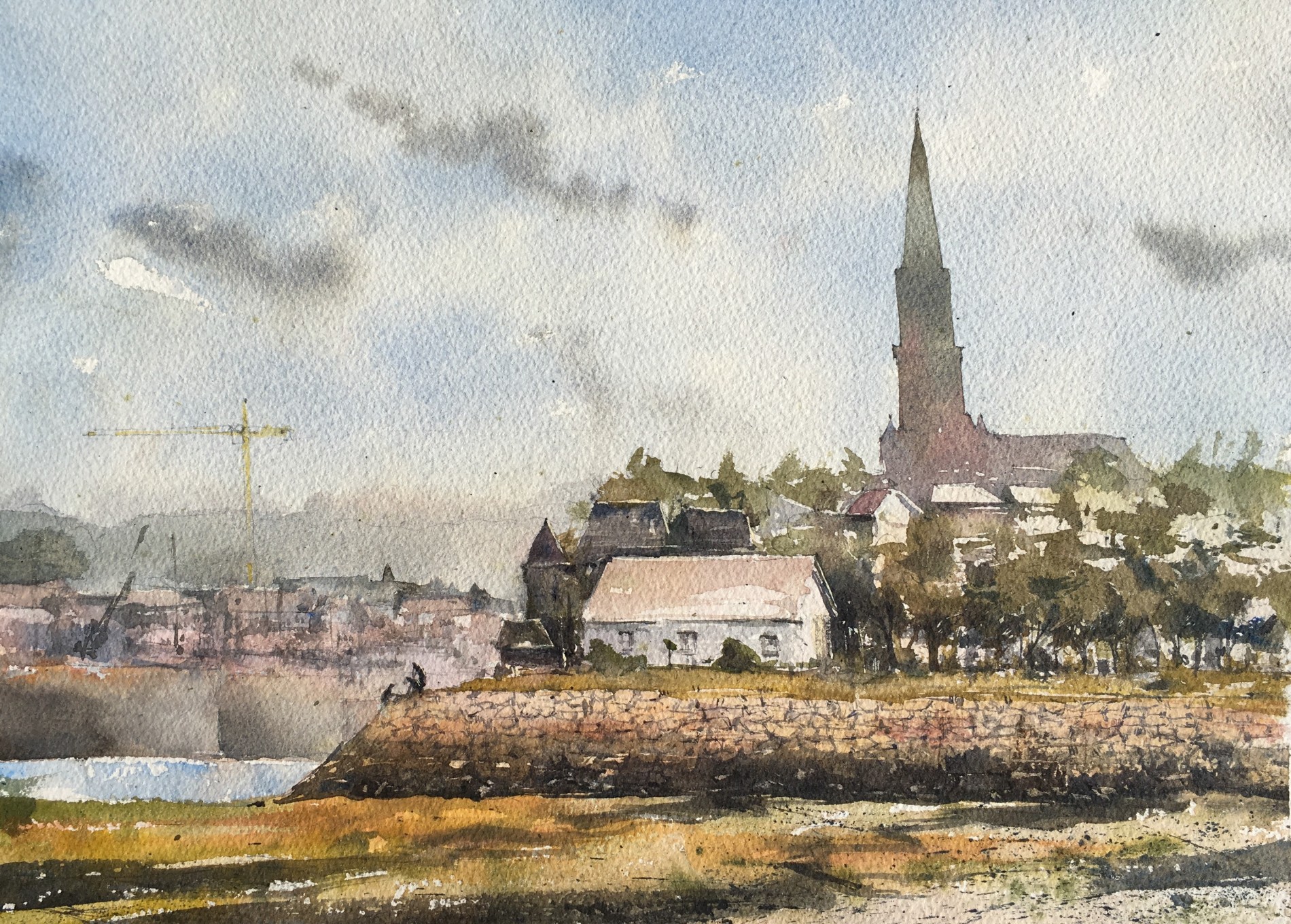 My Mother in law’s house is by the sea, it is a beautiful place. The view from the garden is panoramic, here I chose to paint the view of Paimpol town which is a few kilometres across the tidal bay. I actually painted this on the very first day of the visit (2017o619) but have only it published now.
Painted on Arches rough 300g, quarter arch in size. 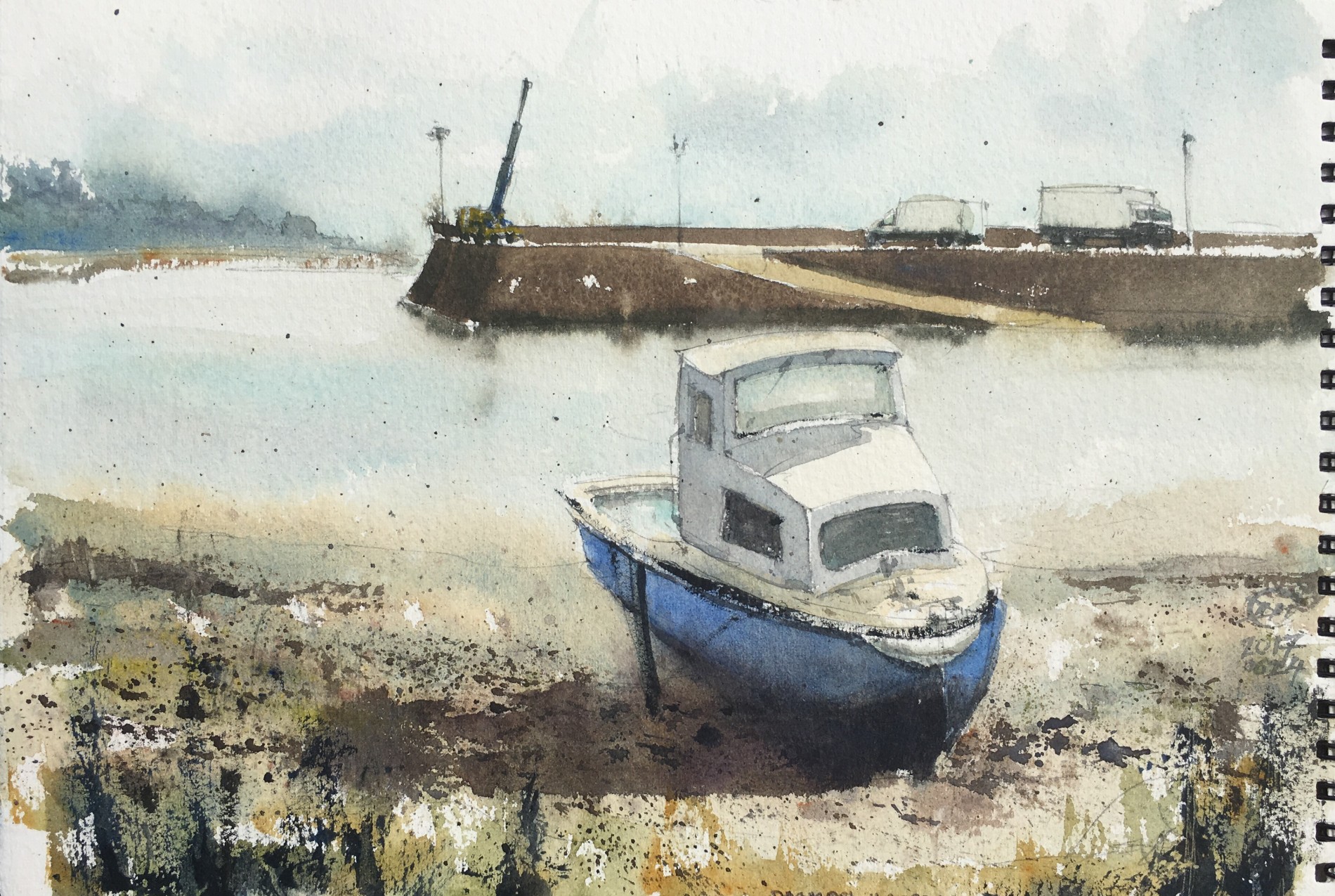 I painted this boat last year and now again in 2017, it’s form is cute. Not sure if it has been discarded as it lies next to the graveyard of old wooden boats just outside the harbour. I have been coming to Paimpol every year for ten years and I paint the boats that are no longer loved, they are returning slowly to the sea.
Saunders Waterford fine grain watercolour sketchbook 300g 19 x 28 cm.

Click on the image below for full sized picture 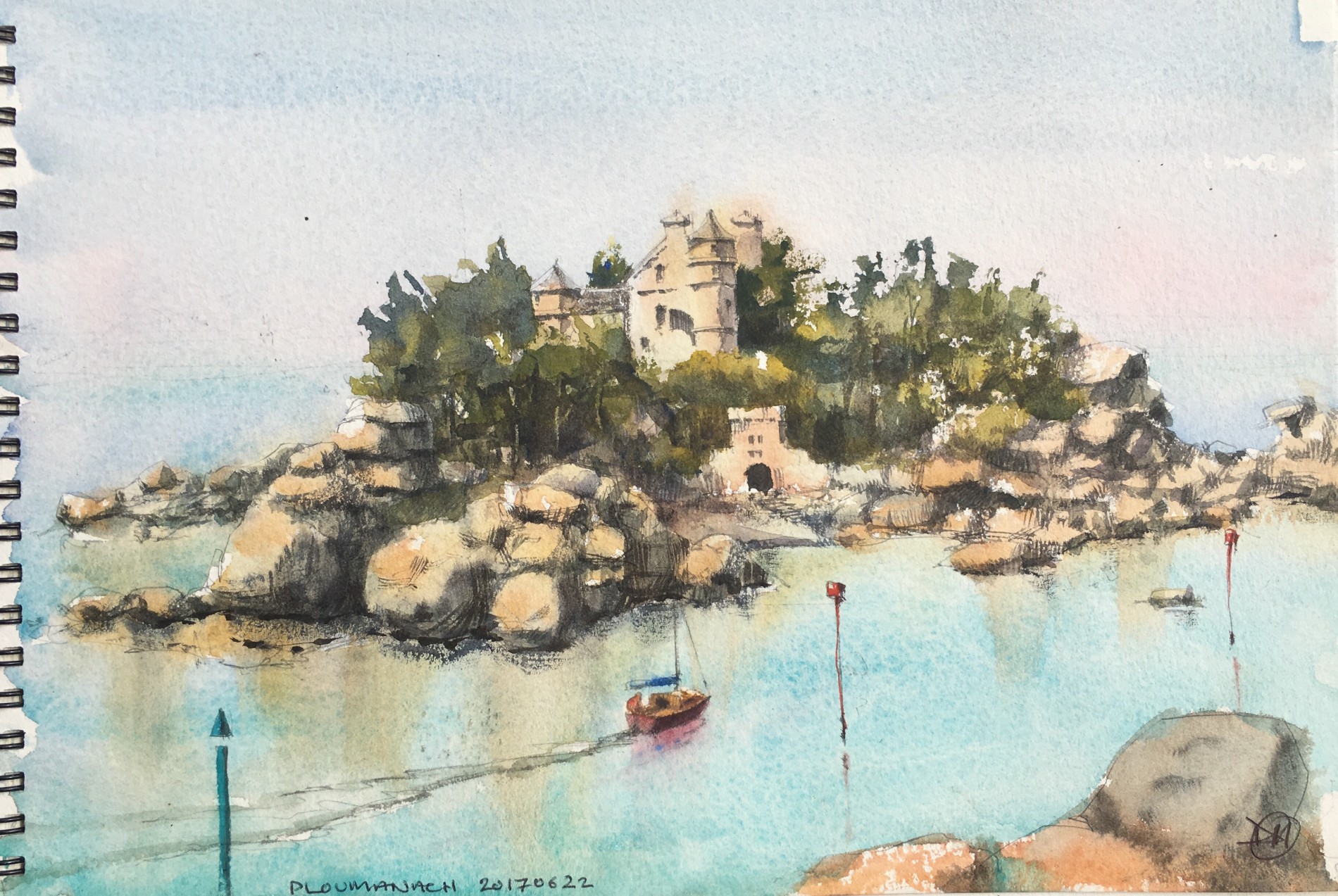 Have you ever been to Ploumanach? Giant pink granite boulders by the sea that make people look very small. Nature is king indeed.

Click on the image below for full sized picture 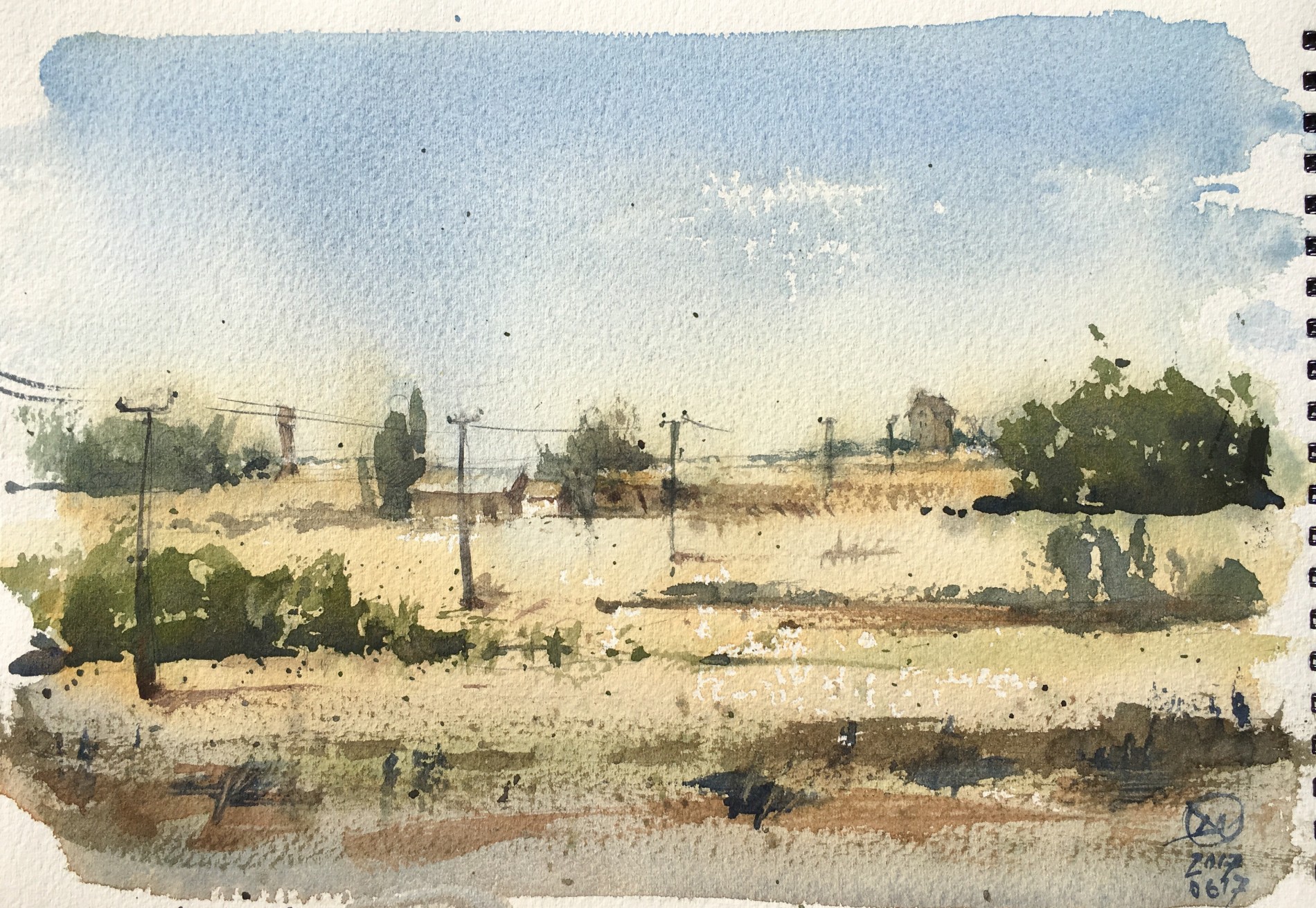 Last week, my wife and two artist friends Lars and Inger travelled to Paimpol in Brittany. It was a long trip, 11 hours in total. To pass the time I painted a watercolour looking out of the train window between Paris and Rennes. The wheat fields outside Paris remind me of the Stockholm archipelago – there are islands of trees as far as the eye can see, there is no water but a sea of wheat.
Saunders Waterford fine grain sketchbook 300g 19 x 28 cm. 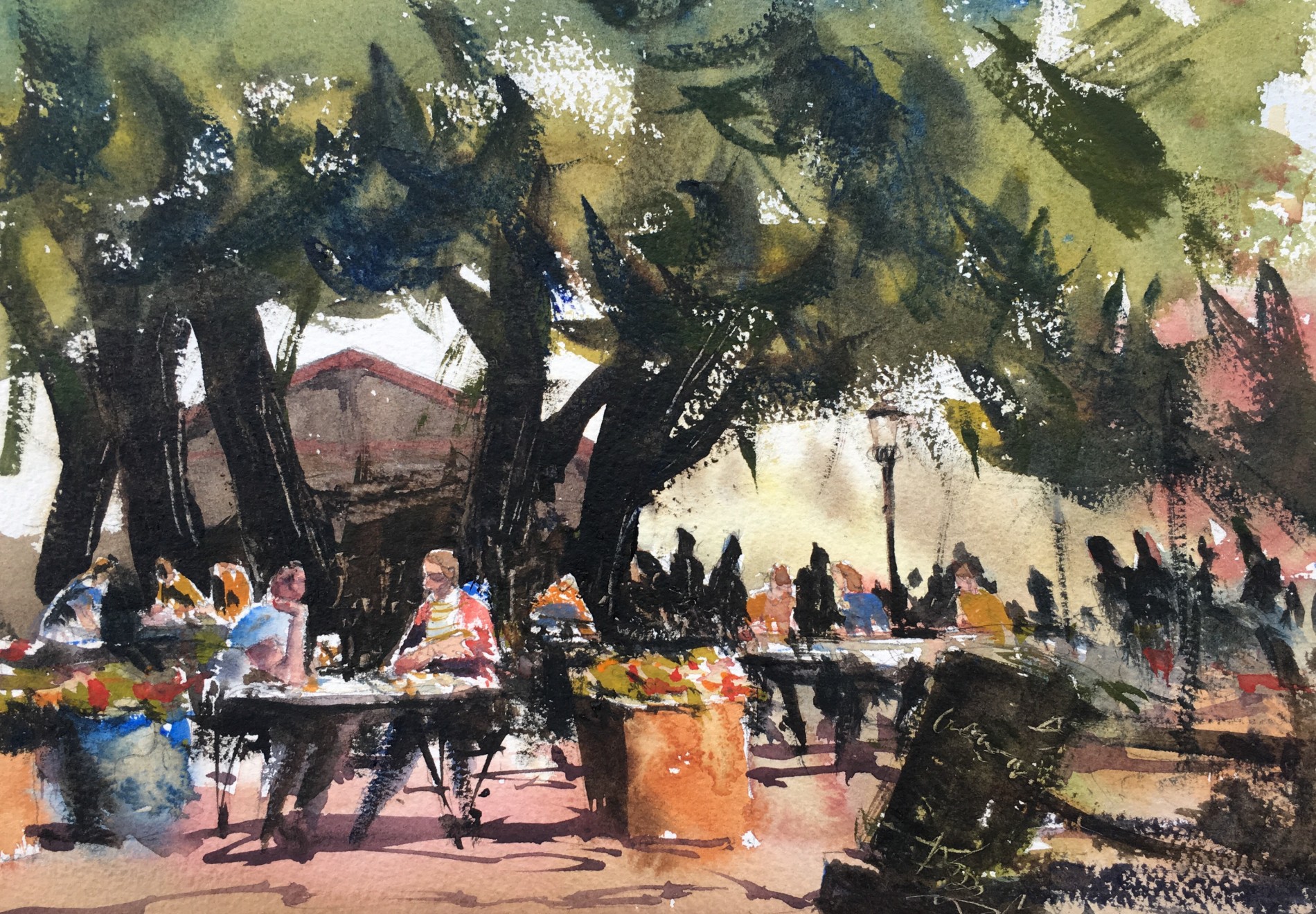 I met up with some friends yesterday at Kungsträdgården and painted this sketch of people enjoying a coffee at Tehuset, a café in the park. It was a beautiful afternoon and we had a long chat afterwards, we talked about techniques, our ambitions and what plans we had for the summer, a lovely day.

My sketch was painted on Arches Rough,  31 x 23cm.  I will return and paint this scene again. I feel I went too dark, I like contrast but I went too far.  – But yes, it’s just a sketch.
Click image below to view larger version 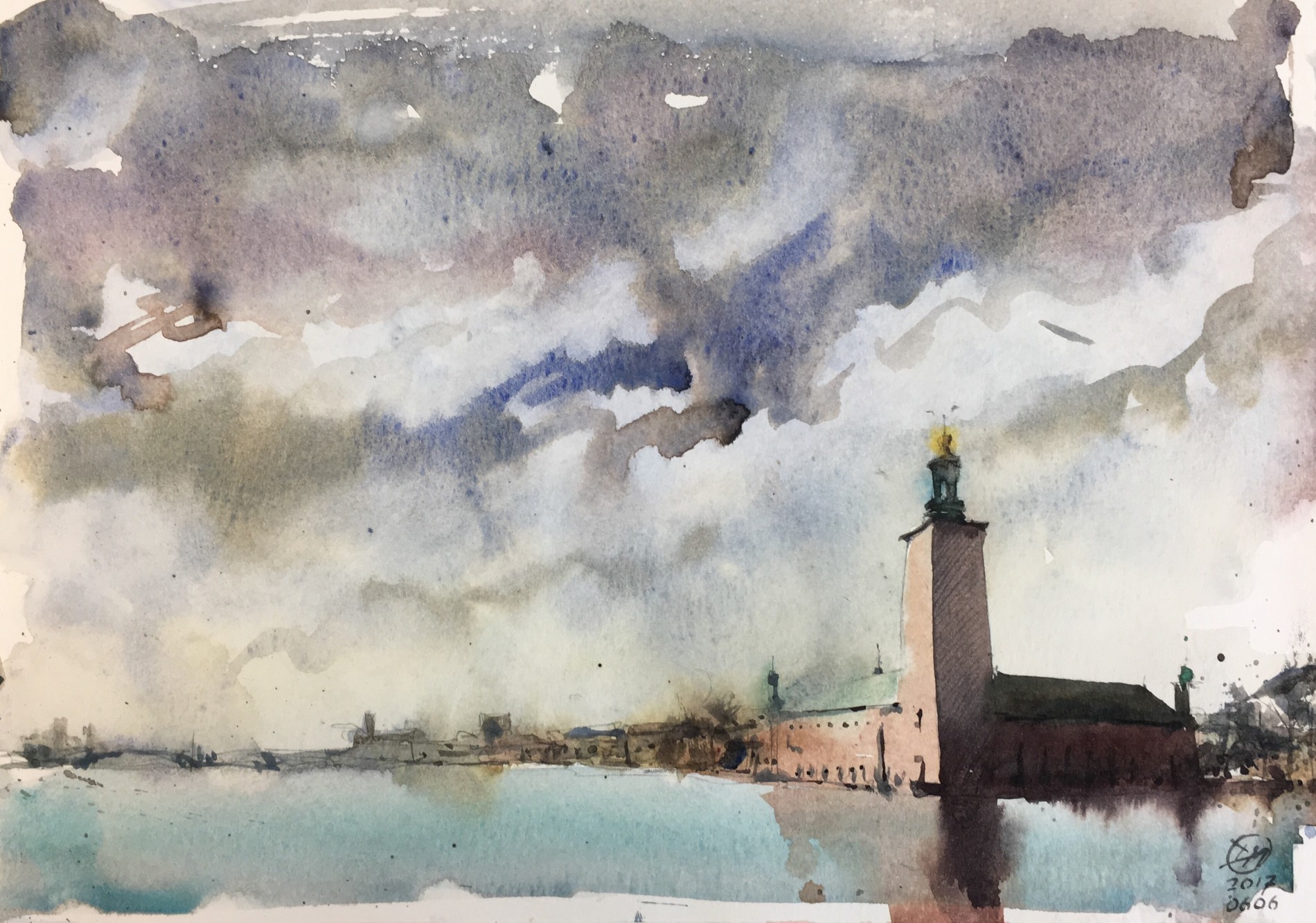 I’ve been busy doing other things than art recently like watching my son graduate and helping him move back to Stockholm after 3 years in Karlskrona. I’m working this week but yesterday was Sweden’s national day so I had the day off which meant I could watercolour! 🙂
I hadn’t painted for a week so in order to get going I painted this sketch of Stockholm’s town hall called “Stadshuset” in Swedish. I think it’s a very beautiful building so I have sketched many times and I probably will continue to do so in the future.
While I was painting yesterday, I filmed it using a GoPro camera. I bought one secondhand last year and have found it hard to start filming with it. I think it is like everything that requires some learning, the first step is the hardest. But now I have taken that first important step and I have ambitions to publish short films of myself while I paint watercolours. I am currently studying how to edit using Premiere Pro, so much to learn; one step at a time David, one step at a time.

The sketch was painted in a Moleskin watercolour journal. The paper quality sucks but if forces me to adapt which isn’t a bad thing.

Click on the thumbnail below to view larger image.

Hi my name is David Meldrum and I love to paint watercolours. I live in Stockholm, Sweden and I am originally from Ireland.
If you would like to support my art and demonstration videos, please visit my Patreon account.
(Thank you! 😀 )
www.patreon.com/meldrumart

Recent Comments
meldrum posts
Archives
%d bloggers like this:
We use cookies to ensure that we give you the best experience on our website. If you continue to use this site we will assume that you are happy with it.Ok