I’ve been busy doing other things than art recently like watching my son graduate and helping him move back to Stockholm after 3 years in Karlskrona. I’m working this week but yesterday was Sweden’s national day so I had the day off which meant I could watercolour! 🙂
I hadn’t painted for a week so in order to get going I painted this sketch of Stockholm’s town hall called “Stadshuset” in Swedish. I think it’s a very beautiful building so I have sketched many times and I probably will continue to do so in the future.
While I was painting yesterday, I filmed it using a GoPro camera. I bought one secondhand last year and have found it hard to start filming with it. I think it is like everything that requires some learning, the first step is the hardest. But now I have taken that first important step and I have ambitions to publish short films of myself while I paint watercolours. I am currently studying how to edit using Premiere Pro, so much to learn; one step at a time David, one step at a time.

The sketch was painted in a Moleskin watercolour journal. The paper quality sucks but if forces me to adapt which isn’t a bad thing.

Click on the thumbnail below to view larger image. 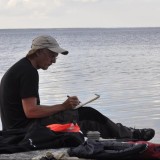 My name is David Meldrum. I am an Artist who loves watercolour.

One reply on “A quick sketch”

Fresh and clean, your skies are better day by day. I´m expecting for your films, a very good way to learn.

This site uses Akismet to reduce spam. Learn how your comment data is processed.

My name is David Meldrum, I love painting watercolours. Another passion of mine is life drawing, I run a drop in session every Thursday evening here in Stockholm and also online. www.meldrumkroki.se

I was born in Ireland but since 1990 I have lived in Stockholm, Sweden.

Join my Patreon supporters, it's crowdfunding for creative people. Thank you. www.patreon.com/meldrumart